With the continuous advancement of China’s ecological civilization construction, many provinces and cities have successively issued sand and gravel mining restrictions policies. The improvement of environmental standards, the construction of green mines and large-scale and large-scale mining mode has become Important features and development trends of sand and aggregate. The pace of transformation and upgrading of the gravel aggregate industry continues to accelerate. 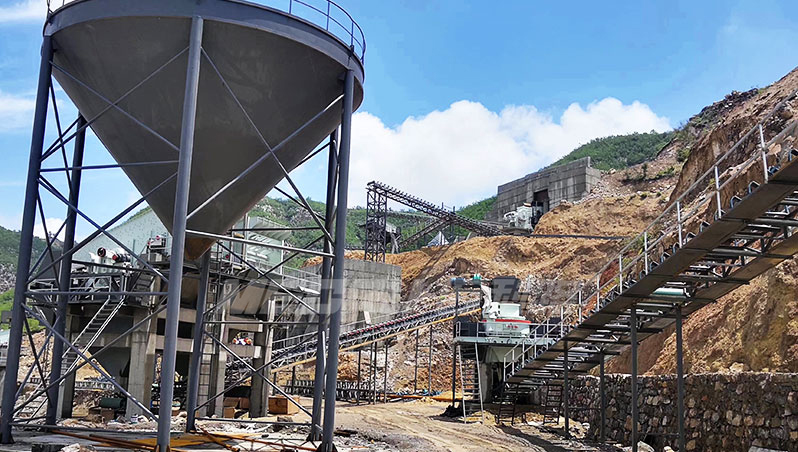 During the “Thirteenth Five-Year Plan” period, ecological priority development requirements promoted the transformation and upgrading of the gravel aggregate industry.  The “One Belt, One Road” initiative brought opportunities for sand and gravel companies to the world. China Power Construction Group resolutely responded to the national strategy and invested in the construction of Changjiu (Shenshan) limestone mine project with a “dare to be the first in the world” attitude, quickly occupying the commanding heights in the construction aggregate industry and leading the transformation and upgrading of the national sand and stone industry and its future development.

The Changjiu (Shenshan) limestone mine project includes the mining area (mine and sand processing system), logistics corridor and wharf. The total reserves of mine proven resources are about 1.908 billion tons. After completion, it will be the world’s largest production base for building materials and aggregates. Finished products will be transported to a dedicated dock in the Yangtze River through a belt conveyor corridor with a length of 12.98 kilometers. It is the long-distance belt conveyor system with the largest transportation capacity in the world.

Gezhouba Group: Aspire to seize opportunities in the aggregate sand and stone industry

At present, Gezhouba Investment Company has held a communication meeting for gravel aggregates with more than a dozen units. In more and more in-depth discussions, “the gravel aggregate industry is promising” has become the consensus of all units, the ideas have reached unprecedented unification, and the enthusiasm for finding projects is rising. Many units have formulated a gravel aggregate business development plan. Gezhouba Fifth Company plans to include gravel aggregate in “one main and two auxiliary”. Gezhouba Yipuli Company continuously improves its technology, and Gezhouba First Company has enriched the market development power. Units that are less involved in the gravel and aggregate business are also investing in the army looking for project information. At present, Gezhouba Investment Company has collected nearly 100 pieces of project information, and after strict selection, multiple projects are proceeding in an orderly manner. The Yuzhou gravel aggregate project operated by Gezhouba Yipuli Company has become a model project of green mines in Henan Province, and is being declared as a model project of national green mines. As the main platform for comprehensive transportation investment and financing in Zhejiang Province and the main force of transportation construction, Zhejiang Transportation Group won the 180 million tons of reserves for the Dahuangshan construction stone mine in Zhoushan City, and entered the perspective of colleagues in the sand and stone industry. Has successively won the mining rights of Dahuangshan construction stone (tuff) mine in Taoyaomen Community, Cenggang Street, Dinghai District, Zhoushan City, with a resource reserve of 184,405,700 tons; the mining rights of Xuanwu Xin Rock Mine in Xianyi Village, Lixin Township, Lidu District, Lishui The resource reserves are 12.4071 million tons; the mining right of Youyouping basalt rock mine in Xihou Village, Xiawang Town, Shengzhou City, has a resource reserve of 13,604,800 tons; the mining right of building stone mine in Zhangguan Village, Huangzhai Town, Pujiang County, has a reserve of 47.371 million tons. A